[ 08 . 07 . 06 ]
one issue i wanna address first off about saturday: don't hate the Norva if you got kicked out of the show. yea, we don't like them too much either ourselves right now, but don't be prevented from seeing a band that you really like in the future because of us. but, in all seriousness now, haven't you guys ever been kicked out of a venue before? it's all part of the package. anyone who goes to shows on somewhat of a regular basis has either been kicked out, or has seen someone get kicked out before. i'm not saying i provoke it, but consider it a battle scar if you were one of the rowdy few "expelled for misconduct;" we give you guys especially muchos gracias [that's spanish for mad props], and just slightly less to everyone else and the bands [just kidding]. but anyway, we got some real shirts coming. sorry to those who didn't wash their shirts right who got one on saturday. we promise the next batch will be professional quality, as will the stickers. however, we're still keeping it real with some DIY patches. you can be lookin forward to all that stuff being here for you in september. other than that, see you guys at Volume next week.

[ 07 . 10 . 06 ]
NorVa tickets are available right now! you get us and four other east coast punk bands, and get to enjoy the NorVa's "facilities" all at the same time! we're expecting a huge turnout, so tickets might go quick. call Paul @ XXX.XXX.XXXX to get one. the show is august 5th @ 8PM. no idea when the doors open, sorry. i also don't think tickets are available at the door, so you'll have to call Paul [don't worry, he doesn't bite hard].
(this message has been altered from it's original posting...) 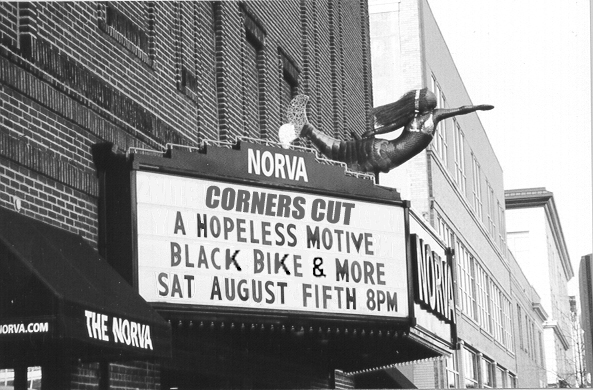 even tho that wasn't the best show we've ever put on ourselves exactly, Fake Your Death, Grave Goods and Gas Blast Bus Explosion made sure that you guys got what you came out for. we never expected to get so many kids in a record store on a monday night like that, it was wicked. sorry about the limited space tho, we're tryin to work up to larger venues so you guys can have some room to move around, which is why we just booked the NorVa with Corners Cut for early august. it's gonna be their CD release show. showtime is unclear right now, but ticket price is looking like $10. hope to see you all there! 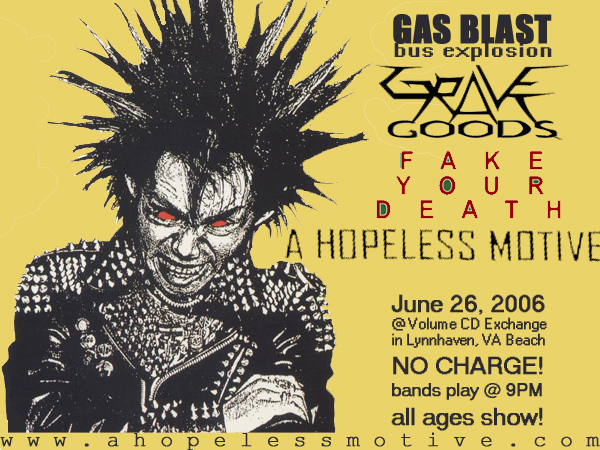 [ 05 . 19 . 06 ]
toni's party from last friday was freakin wicked. i am not responding until now simply because the copious amount of partying led to a deep, week-long slumber from which i have immediately emerged simply to write this post. again, we have to give much, much appreciation to the bands that did show up [and no worries to those that didn't] and of course to all those crazy folks who went directly from moshing to passed out unlike i've personally ever seen. it was sick. i think we were knocked over a total of three times [which is probably why stages exist] and we'd love to do it again anytime toni. anyone who was there also got to check out a little tidbit of our new stuff, so if you're trying to sample it show up to one of them shows!

[ 05 . 05 . 06 ]
this post is a little late, but we just wanted to say thanks a lot to all the people that showed up last friday [and there was a good number of you], and to the bands who played with us. i heard we raised about $2,500 for cancer patients and research and about $200 [for ourselves HAHAH!] from the other show and CD sales. thanks a billion to everyone who picked up War, What For?. be sure to let us know what you think in the contact section of the site. all in all though, it was fun as hell. we definitely are going to play with Corners Cut pretty soon. they're tryin to book the NorVa for us, so more info on that to come... other than that, happy cinco de mayo everybody. drink lots of cheap mexican beer [and tequila of course, but you probably only have enough cash for the corona, right?] 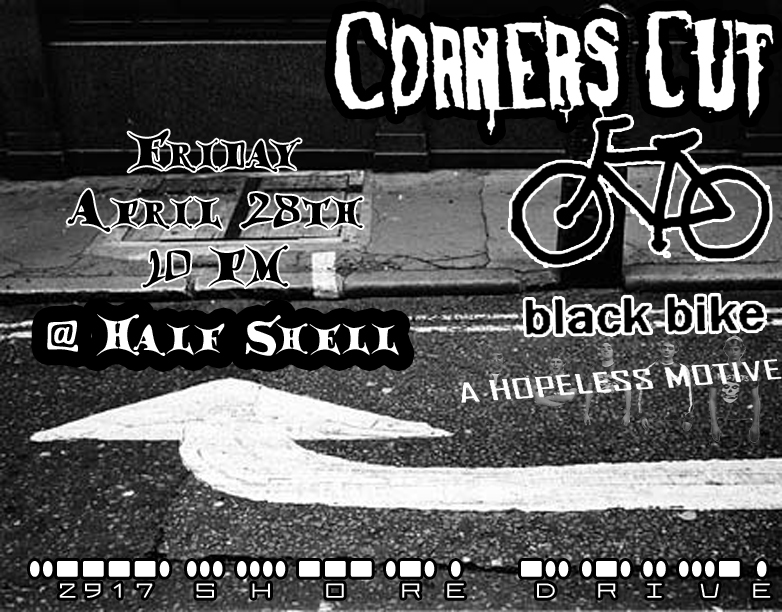 Corners Cut made a better flyer so i thought i might put that up here. i wish i had time to make a chronic one like that, but i just don't have much time right now. as a matter of fact i just got out of court about an hour ago and i gotta go do school bs in a little, so this post is gonna be short. post us back on our myspace if you have one. til next time...
(this message has been altered from it's original posting...) 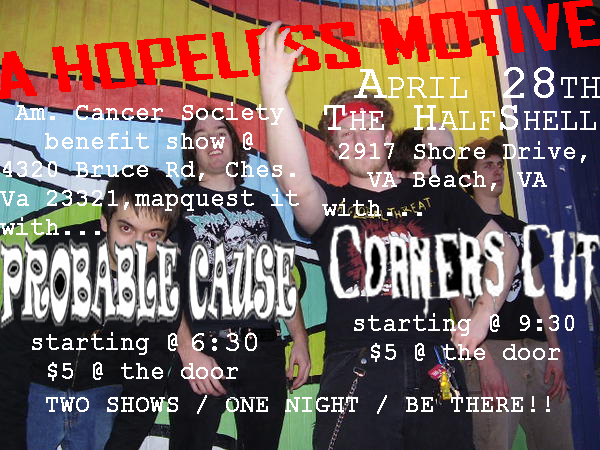 thanks to everyone who came out to the show the other night, especially to The Exploding Grandmothers and The Crackout. there weren't quite enough people to really call it a show though, so we're gonna have another CD release sort of show, at not only one venue, but two in one night! be sure to show up to at least one of them!

[ 04 . 05 . 06 ]
the CD is finally here and on sale @ Relative Theory and Skinnie's in norfolk. we hope to see a lot of you down in the OBX for the show on friday. you can also pick up a copy of the new album there. well i don't have anything funny or interesting to say [kinda like always...] so i'm gonna end this. see you all friday.

[ 03 . 26 . 06 ]
sorry guys for the lack of having a website for a little while. our last provider shut us down because they just plain suck. i'm workin on the site at the moment [3:12 am] and should hopefully have more coming real soon. the CD's gonna be out in about two weeks and we'll be having a release show at the Pit to celebrate. more info will be coming in the shows and merch sections. until then everything's "under construction" cuz i'm gonna catch some zZzZz's. keep posted.